On May 2nd, The Guardian posted about the first ever rock opera dedicated to the Holocaust. Lyricist and second generation member, Jeremy Schonfeld,  set out to tell his father’s Holocaust story and of his relation to his father’s story. He says that the rock opera just seemed to capture the full range of the emotional landscape. Here we see that even as we become farther removed from the event, people are still finding new ways to memorialize the Holocaust. The rock opera also highlights the shadow that the Holocaust has cast over future generations. Schonfeld’s piece will debut this week  at the Music Center at Strathmore, in North Bethesda, Maryland. 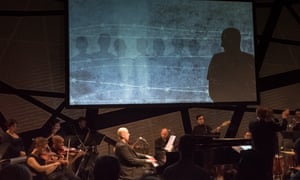 Schonfeld says that he remembers asking his father what he wished the show would contain and he responded that he wished it to have an element of hope. He believed that other than the year he’d spent in a concentration camp, he’d lived a good life. I believe that here, the artist is not responsible for creating a narrative that provides the perfect balance of hope and despair. Here, the  only responsibility is to honor his father. This is not a piece that purports to explain the Holocaust in its entirety, only to explain his father’s experience. Although the same may be true of films such as Schindler’s List, which only examines a small part of the full story, but has come to symbolize the entirety of the Holocaust for the American people.